Ancient Eclipse is Bang Bang Games‘ first slot release which calls for a bit of celebration. However, let’s not forget it’s also in partnership with Yggdrasil Gaming – one of the iGaming industry’s foremost slot vendors.

The action tees off on a grid with 5 reels and 50 paylines. Note, the reels combine to create a maximum of 1024 ways to win. Moreover, the theme of the online slot pays homage to the ancient Mayans and eclipses. They were famous for the Mayan calendar which predicted that the world would end in 2012.

Luckily Yggdrasil and Bang Bang Games focus on the lighter side of things here. The slot has a few innovative streaks of its own. Players will notice that the sun and moon will combine to create an eclipse. So, a bit of visual theatrics as you spin the reels. Furthermore, Ancient Eclipse offers a maximum earning potential of 4,595x your stake.

The Moon symbols are important because they transform positions into Sun frames. Above all, there’s a Free Spins feature that’s replete with Sun Frames. To find out more, read our slot review of Ancient Eclipse.

The coin betting range of Ancient Eclipse is $0.20 to $100 per spin. It’s wide enough for penny pinchers and for the big spenders looking for a jackpot win. Where can I play Ancient Eclipse slots for real money? The slot is not live at the best Australian online casinos. Yggdrasil Gaming is one of few slot studios that make their pokies available to Aussies. Therefore, it should come as good news to you. 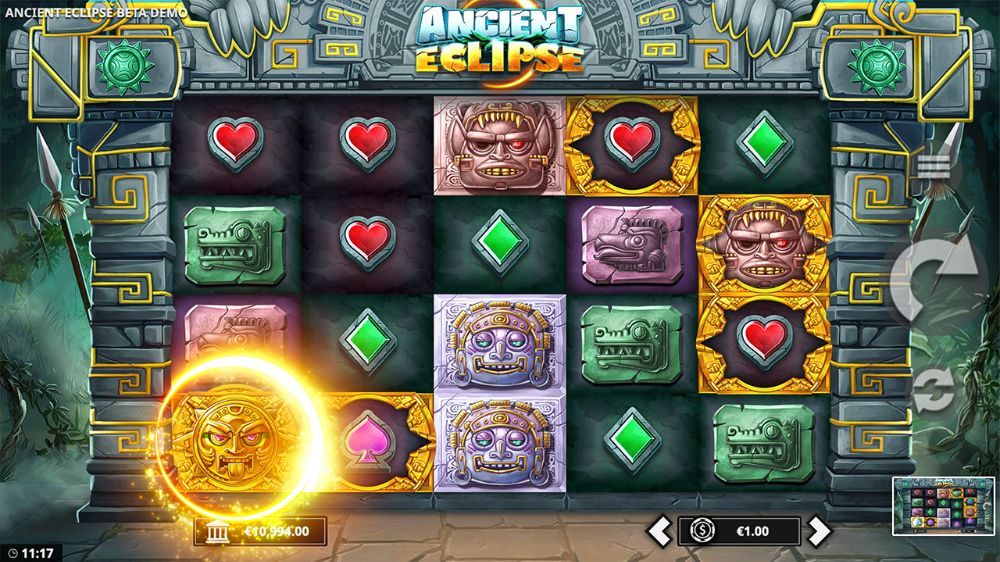 The RTP or payback rate of Ancient Eclipse is 96.55%. Without sounding too philosophical it’s very good. However, it gets better with a hit frequency of 29.40%! In layman’s terms, you’ll receive a winner on every 3rd spin; well more or less. What this tells us is that Ancient Eclipse is good value for money.

A South American jungle along with a Mayan temple serves as the backdrop for the reels. The low-value symbols on them are card symbols such as clubs, hearts, diamonds, and spades. The high-value symbols are an alligator, jaguar, eagle carvings, and two Mayan deities.

The premium symbol is the god with the red gem. When 5 of them pitch you’ll bag a win of 5x your stake. The Sun Disk is the Wild and subs symbols adjacent to it. The other noteworthy symbol is the feathered headdress scatter. It appears on the 3 middle reels only. Moreover, a bunch of them offers a win of 10x. Generally speaking, winning spins in the main game occur when 3 or more matching symbols appear. 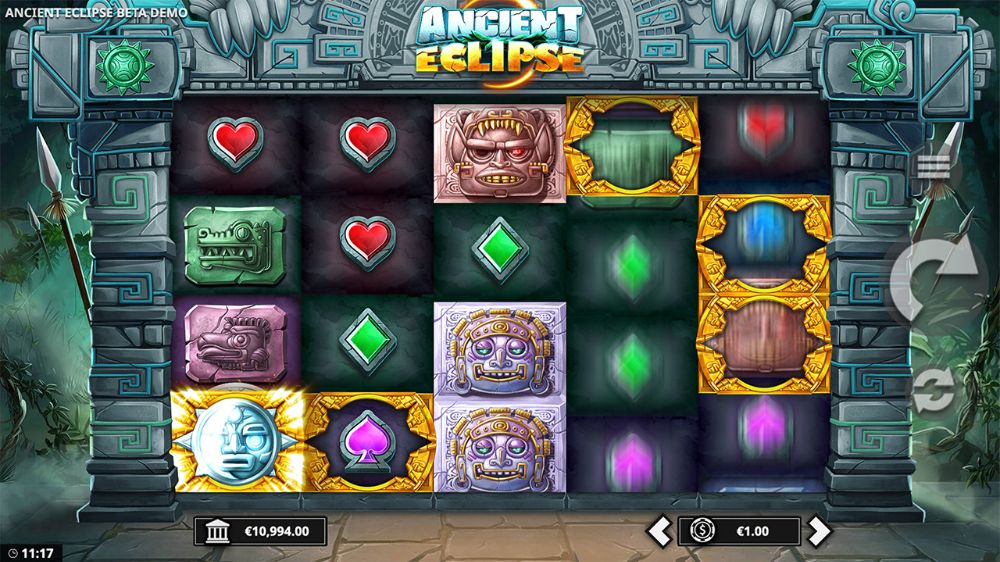 The bonus rounds of Ancient Eclipse are unique. In other words, they don’t play out as you’d expect. Since they gravitate around the Eclipses which drop plenty of wilds along with multipliers. Play reaches a climax during the Free Spins as it offers more wilds and eclipses.

When the Moon symbol appears it transforms into a Sun Frame which sticks to the reels. The other symbols can also land in the Sun Frame. You’ll trigger the Eclipse Feature when a Moon symbol lands in a Sun Frame. naturally, all the sun and moon symbols become wilds. Needless to say, the payout will be grand!

You’ll snag a Multiplier when you trigger the Eclipse Feature with an extra Moon symbol. In case, you initiate the bonus game with two moon symbols; the game engine doubles your cash prize. The Sun symbol disappears from the grid once a symbol transformed into a wild.

The business end of Ancient Eclipse is its Free Spins feature. It hosts the jackpot of 4,595x which makes it a must trigger. That’s if you’re a jackpot hunter of course. To get into the free spins. You need 3x feathered headdress scatters which award 12 free spins.

Each free spins benefits from a Sticky Sun Frame. For some extra juice in the Free Spins. Bang Bang Games enables players to trigger the Eclipse bonus when a Moon symbol pitches. It rewards an extra free spin too. 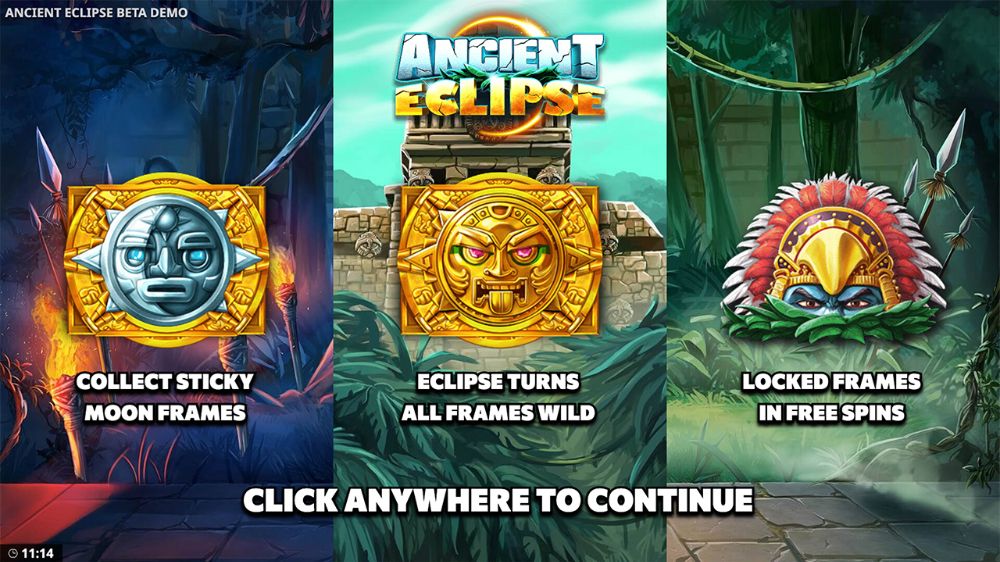 Bang Bang Games/Yggdrasil veers away from the standard slots play. We had a choice of playing it for real money at the lowest wager or play it for free. We decided on the latter. Which was a good call by the way because the game’s engine is quite intricate. It took us a few spins to get used to it because of all the eclipses flying about. It’s unusual yet refreshing at the same time.

The volatility is medium to high, as such we played the slot at the min wager of $0.20 for 100 spins. Payouts aplenty occur in the base game but they’re small. However, when the wilds appear wins can go up to 1.5x. We triggered the free spins feature after 58 spins and won 7.5x our stake. It’s a lucrative bonus because you can catch plenty of wilds and the odd multiplier.

Ancient Eclipse sells itself with its orthodox bonus rounds. The visuals are bright and colourful and the audio track whisks it up by another level or two. It takes a while before you get used to the engine but once you got the hang of it. It’s a captivating and entertaining slot.

The Eclipse Feature and the Locked Frames Free Spins require a bit of elbow grease. While the Sun Frames deliver plenty of wilds. The hit frequency and the RTP ensure plenty of winning spins. As a result, it doesn’t become a tedious slog. Another great Yggdrasil slot in partnership with Bang Bang Games. We also commend the studio on its first slot, and may there be plenty more.

If you enjoy slots with a Mayan or Meo-American theme have a look at Habanero’s Totem Towers. It’s a visual delight, it offers a jackpot of 10,000x and awash with bonus rounds.