Ancient Eclipse from Yggdrasil Gaming has 50 paylines, 5 reels and 4 rows. There’s plenty of action going on beneath its colourful exterior. Let’s get the show on the road with the online pokie’s jackpot of 4,000x your stake.

In terms of the pokie’s special features there are plenty! Ancient Eclipse has Collectable Sun Frames, Free Spins with Locked Frames, and an Eclipse features. The slot machine reminds us of John Hunter and the Mayan Gods. We’re not referring to the mechanic but to its game art and symbol display.

Aussie players can spin the reels from AUD$0.20 to AUD$100 per spin. So, the maximum earning potential we’re looking at is AUD$400,000 on one spin. Aussie real money pokie players can now play the game at our best online casinos for Australians.

Which is excellent by the way since Yggdrasil does not cap it with a small betting range. As we hurtle towards the end of 2020 we believe the best is still to come. Suffice to say, it’s been a very strange year but we’ll take it on the chin.

The volatility of Ancient Eclipse is medium to high variance. Therefore, it can be rough on the pocket at times. For what it’s worth Yggdrasil joins hands with Bang Bang Games in this outing. The studio will only release the best pokies online in 2021. We’re a bit early out the blocks but hey that’s just the Casinowhizz team for you.

We’re big fans of the Yggdrasil pokie machines and this one definitely comes with a theme we dig. The story line or theme pays homage to the ancient Aztec’s god of the Sun, Huitzilopochtli. The Aztec’s were a Mesoamerican culture that thrived between 1300 to 1521 AD in central Mexico. 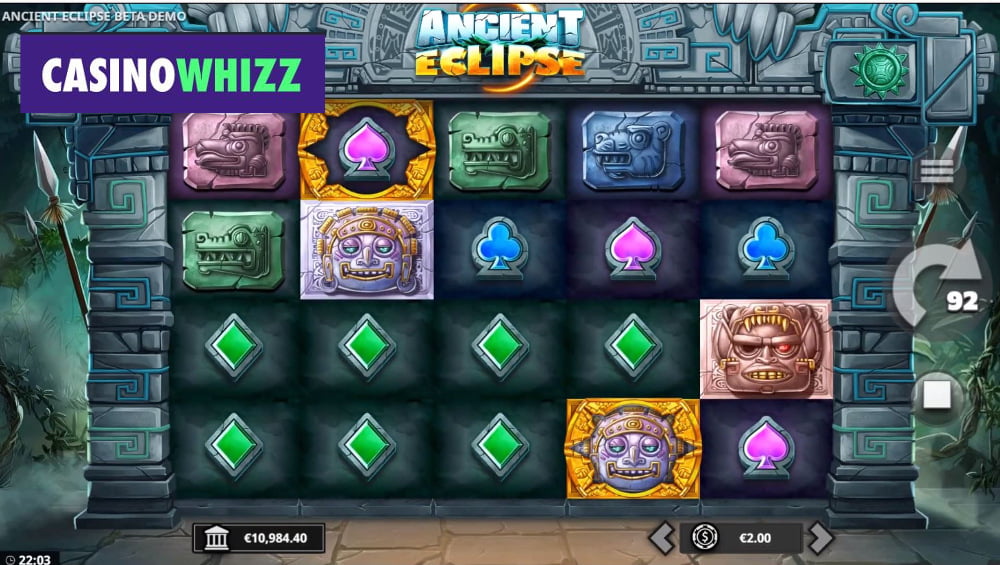 The RTP of Ancient Eclipse is 96% which is the standard for the industry. The hit rate of the game should be around 25% which provides a payouts on every 4th spin. The symbols that appear on the reels are various stone idols, and card suits that look like gems. The graphical display is typical of the theme. There’s also plenty of stone idols, an alligator, jaguar, priests, and the Sun god.

American casino players that like slot machines with a historical theme can play Achilles Deluxe. All the info about the slot is in our detailed review of the slot. Americans can play it for real money at our safe online casinos in the USA. Moreover, players also qualify for a welcome bonus on the first deposit.

The wild symbol is the Sun Symbol. It completes a winning combination when it substitutes symbols adjacent to it. However, it does not replace the Moon scatter during a winning combo.

Play pivots around the Wild namely the Sun symbol. The Sun Frame is the border that appears around the symbol positions. What it does it transforms all the frames into Wilds. They usually stick to the reels until they disappear. Or, when the pokie player changes the bet per spin.

Now, you’ll trigger the Eclipse feature when the Mon scatter lands in the Sun Frame position. The interesting about the bonus rounds is that the Moon and Sun Frame symbols become wilds. Therefore, you can snag successive wins.

The key to the big wins is to collect as many sticky wilds as possible. They also remove the sticky Sun Frames from the reels. Now, if you’re lucky enough to trigger the feature a few times. You’ll benefit from a multiplier meter which boost wins by a substantial margin.

As we head onto the business end Aztec Eclipse the Free Spins round. You need at least 3 Moon scatters on the centre reels which trigger 12 Free Spins. When a bunch of Moon scatters without frames pop up again you’ll score an extra free spin.

For every wild that appear on a Free Spins a Sticky Frame will envelop it. The frames remain on the reels until the free spins round ends.

When the Moon scatter pops up onto the reels, and there isn’t a Sun Frame. The Sun Frame will appear in that position and it will become sticky. As a result, the player will initiate the Collectable Sun Frames feature.

Ancient Eclipse is a typical Yggdrasil pokie. The Casinowhizz team holds the option that Yggdrasil is the undisputed master of the historical theme slots. Right of the bat, Yggdrasil does everything according to the play book.

There’s plenty of bonus rounds, a big jackpot and an RTP that’s 96%. The visual arrangement is not as sharp as Yggdrasil’s previous releases but they’re still adequate enough. The only thing that can spoil the party for players is the high volatility of the game. Yet, it’s to be expect as it pays a top cash prize of 4,000x. It could prove to be one of the more entertaining and bountiful pokies of 2021.

Another pokie machine Aussies can check out is iSoftBet’s, Shining King Megaways pokie. It wows players with its old-school charm, Megaways mechanic, Cascades, Free Spins with big multipliers and a cash prize of 10,000x. Make sure you don’t miss it.