Set against the backdrop of a tropical island (Hawaii) NetEnt presents Aloha. The average payout percentage of the game is 97%. By way of graphics it’s not as sharp as one would have expected since the NetEnt games normally set the benchmark. That said, instead of the customary 5 reels and 20 paylines, Aloha sports 6 reels and 5 rows. To say the least this is a first for me and a unique one at that.

The main attraction of Aloha is its incredible payouts during the base game, the free spins bonus round, sticky wild substitutions and symbols that appear in a cluster formation. In the Hawaiian language Aloha means affection, compassion and peace. I guess this pretty much sets the tone for the game.

The Tiki symbol next to your screen becomes animated during wins. So keep a close eye on it. The highest paying symbol during the base game is the Red Tiki. Five Red Tiki’s awards a payout of 10,000 coins with a multiplier of 30x.

Paying symbols that appear on the reels are different coloured Tiki’s, pineapple, coconut, clam and pink flower. The game can be played for free or real cash be it on a desktop or smart phones like Androids, tablets, iPhones or iPads. Customization options allow you to set the game graphics, audio and the amount of free spins. The soundtrack of the game further compliments its theme. 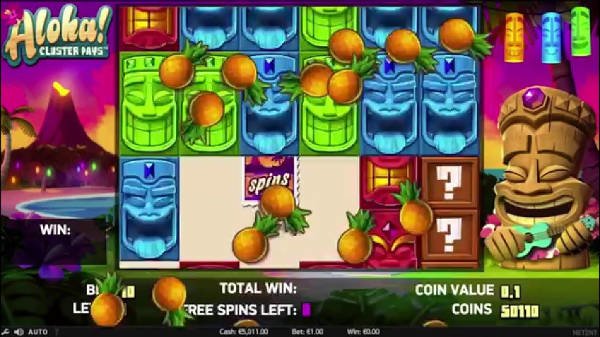 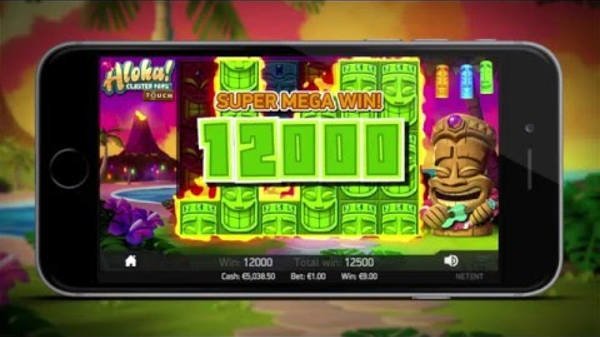 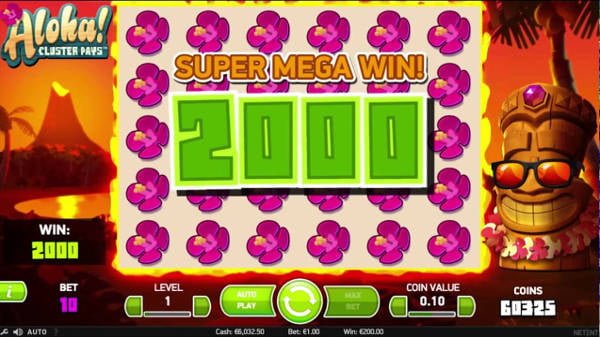 Don’t just dive into the slots without having a look at the coin denomination first. There are 10 bet levels. Situated next to the Max Bet Spin button is the coin value. It begins with $0.01 up to $2. The minimum bet per spin is $0.10 up to $200.

When three different coloured Tiki symbols appear any place on the reels they become sticky and award one re-spin. They also substitute adjacent symbols. When the size of the winning cluster increases, the symbols that increases the size of the cluster will also stick. The symbols that are not wild will re-spin again. If this happens expect a spectacular payout. At the highest bet level all coin wins are multiplied by two.

A win is awarded when 9 or more of the same cluster symbols appear on an active payline. Cluster wins automatically trigger the Sticky Wild Re-Spin feature.

When it appears next to an adjacent symbol it transforms that symbol by awarding the highest possible winning combination. The good news is that it can appear any where on the reels. Just keep in mind that the substitution symbol cannot replace the free spins icon.

It goes without saying that this is my favourite section of the game. The free spins round is triggered when 3 or more Free Spins symbols appear any place on the reels. This game is made all the more interesting because additional free spins could be won. The free spins are awarded in this manner:

As mentioned in my opening paragraph the animations of Aloha is not as crisp as its predecessors. But in all fairness to the game when it comes to its payouts it’s the top dog. I guess this is what makes a game popular and not its graphics. Expect loads of cluster payouts during the base game too. They appear animated and burst into flames. Just like any slots expect a few dry spins in between wins. Overall this is a very entertaining game to play and NetEnt surpassed itself again.