Aladdin and the Sorcerer Slot Review

Pragmatic Play’s Aladdin and the Sorcerer does Disney’s all-time classic justice. Don’t think for one moment we’re biased towards the slots, okay maybe a little since we’ve given it some extra love in this review. Yeah, it is that good! Queen of Gold is another top slot machine from the same iGaming developer. Pragmatic Play earned a name for itself for diving into the classics, and their design techniques inspire today’s market experiences.

Aladdin and the Sorcerer is an amazing-looking 3D slots that sports a Re-spins feature with 3 to 6 random wilds that can pitch on any spin. As Aladdin and the evil sorcerer square off against each other, you’ll see stacked wilds with re-spins and multipliers of up to 3x should Aladdin progress to the second level.

The game features 20 paylines and 5 reels and offers a majestic jackpot (non-progressive) of 6,532x your stake. You can start your adventure at our best Neteller Casinos from £$0.20 to £$100 per spin.

What can only be described as ‘Aladdin’s Cave’ serves as the backdrop for the reels. The reel set is flanked by Aladdin and the Sorcerer. Symbols that appear on them are the 3 wilds, 2x to 3x multipliers (Re-spins) and 10 coloured gemstones with the red gem being the most significant. When 5 of them land at any position on the reels, you’ll pocket a payout of 50x your stake. However, when the standard ‘Wild’ pops up on reels 2, 3 and 4 in the main game, you’ll win 50x your stake.

“High volatility slot machines like Aladdin and the Sorcerer pay out less on average but the chance of hitting those big wins in a short time span is higher.” Pragmatic Play

Aladdin and the Sorcerer has an average return to player percentage of 96.23%, or an edge to the House of 3.77%. 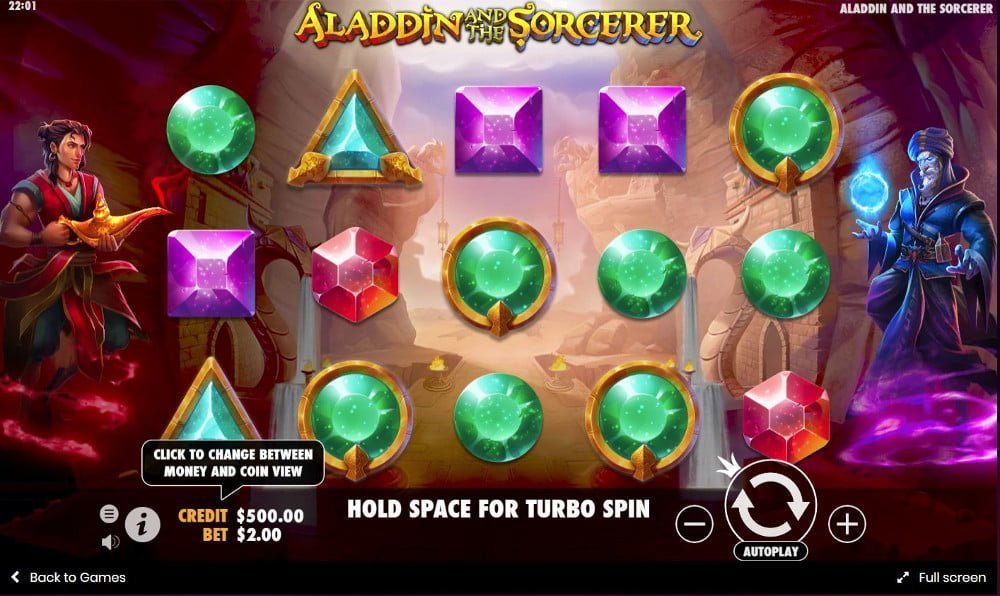 Aladdin And The Sorcerer Wilds

Both Aladdin and the Sorcerer are Wilds when they appear on reels 1 and 5 respectively. When Aladdin pitches, he adds 3 to 6 wilds randomly to the reels, and they become laden with stacked wilds which trigger the Re-spins. Let the fight begin!

The same applies to the Sorcerer. When Aladdin no longer has any segments left on his health bar, the re-spins feature ends. Now, should Aladdin win the game, you’ll progress to re-spin round level 2.

During the bonus mode, the wilds remain locked on the reels. The re-spin level 2 round awards you with 3 spins. It’s on the second spin that the game really comes alive! A 2x multiplier is added and applied to all wins. On your third spin, the multiplier increases from 2x to 3x! Once your 3 spins are done the re-spins feature ends, and you’ll return to the main game. Unfortunately, the re-spins feature can’t be re-triggered.

Pragmatic Play’s, Aladdin and the Sorcerer is not packaged with plenty of bonus rounds. Yet, it’s the quality of the game that roped us in from the very first spin. The extra wilds and re-spins with multipliers form a cohesive whole that could see you win the maximum prize of 6,532x your stake or blow your bankroll to smithereens!

There’s nothing half-baked about this slots. With raw visual show, it’s well-balanced and sprinkled with a few hard-hitting features. If you’re into high variance slots with a jackpot of 10,000x your stake on the line, you can give NetEnt’s Vikings a try.

Which Bonus Round Is The Best?