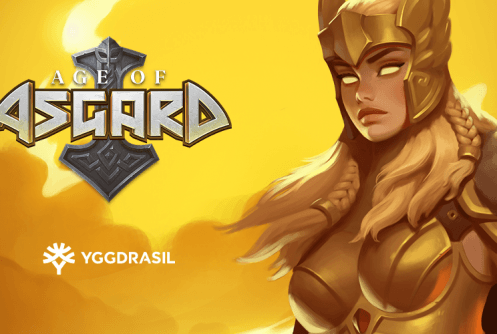 Age of Asgard from Yggdrasil Gaming is another landmark achievement from the Swedish software powerhouse. Based on Norse mythology, this medium-variance video slot plays somewhat like a video game instead of a slot.

We firmly believe that Yggdrasil is onto something good here, but only time will tell. The name Yggdrasil means ‘Odin’s Horse’ and the tree that binds the various realms of the Nordic mythological world. Asgard is the mythological home of legends such as Thor. It’s good to see that Yggdrasil is going all out and not going for a more measured approach like Novomatic, for instance.

The game’s striking visuals are further complimented by Free Spins, Re-spins, an expanding sticky wild and symbol clashes. Bets per spin at our instant withdrawal mobile casinos start from £$0.20 to £$200. The jackpot of 2,444x your stake (£$488,800) makes it the ideal slots for players who are in the mood for adventure as well as those chasing the big wins.

Age of Asgard holds its own when compared to Yggdrasil’s previous release, Lilith’s Inferno 3D slots. It’s not as volatile though; it pays out often and has an average return to player percentage (RTP) of 96.2%. Symbols spread out across the double reels are the low-value runic letters, six lucrative ones divided into 3 females and 3 monsters. The premium female and monster symbols offer a payout of 6x your stake. The 6 prime symbols stand 3-symbols high. 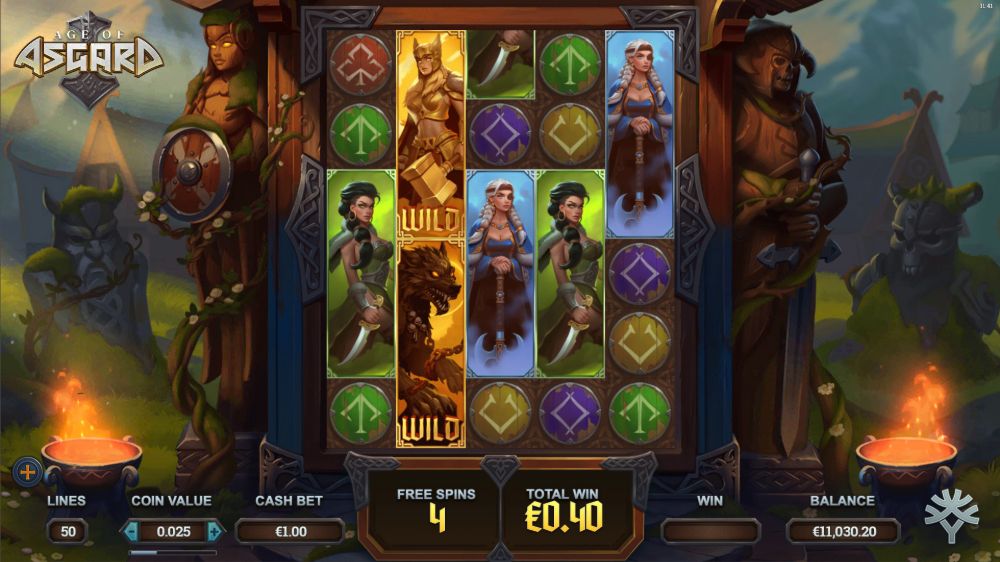 Two wilds stand 3-symbols tall. The first wild is the female warrior, and the second one is a monster. Should they appear on reels 2, 3 and 4 (centre reels), they combine for a winning combination by replacing adjacent symbols.

A re-spin is triggered when the wilds pitch. They’ll remain locked on the reel for the duration of the re-spin. For every wild that appears during a re-spin, an additional re-spin is awarded. A top feature about the re-spins is that when the entire reel set is occupied by sticky wilds, you’ll win 960x your stake. In the main game, this is known as the Ragnarok Big Win. If you trigger the feature in the Free Spins mode, you’ll win 1,200x your stake.

The Clash feature launches when rival wilds appear on the opposing reels. They’ll trigger an avalanche of 2, 3 or 4 smaller wilds. If they are dropped on the premium symbols, the entire stacked wild is covered by random wilds. The payout can be spectacular! 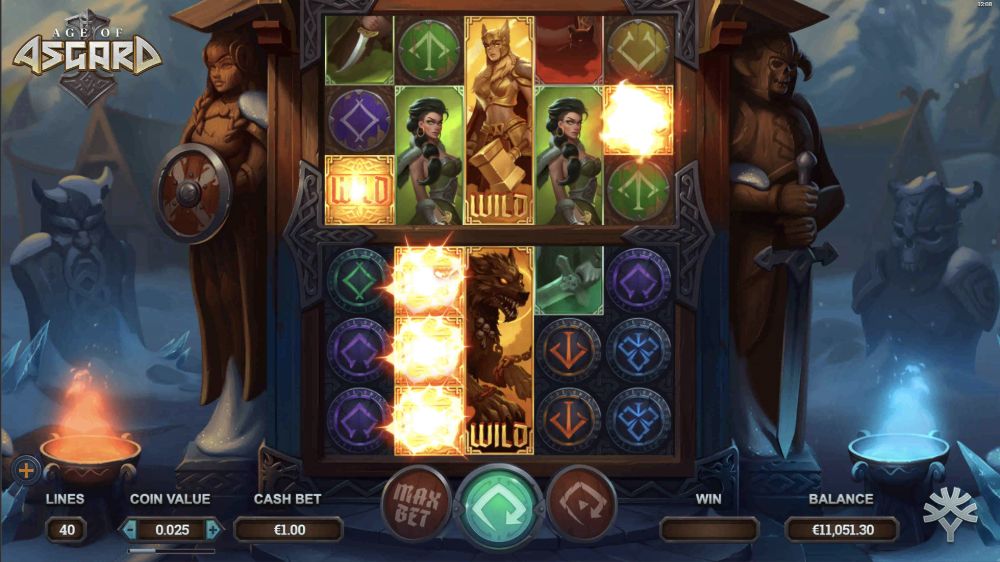 The Free Spins feature can be triggered when 3 free-spin symbols pitch on the top or bottom reels and trigger 10 free falls. The free spins is played with 50 paylines on a 5 by 6 reel set. A very attractive feature about the free spins is that both wilds make their presence felt, and they appear 6-symbols high.

In the main game, the wild is responsible for activating the Clash feature. If they appear in the free spins, they generate 4 additional wilds as well as a re-spin. On each re-spin, the wilds expand, and they stick to the reels. Payouts in the free spins can be anything from 30x to 250x your stake.

Age of Asgard also features a Ragnarok Free Spins feature. Basically, it’s the free spins feature on steroids and triggered by six free spins symbols. Twenty free spins are awarded, and all the low-value symbols are removed from the top and bottom reels. The 6 wilds occupy a large portion of the reels offering re-spins and sticky wilds. When the entire reel set is filled with wilds, you’ll win 1,200x your stake known as the Ragnarok Big Win. We suppose only Thor can prevent you from grabbing this significant victory.

Just when we assume Yggdrasil is done with Age of Asgard’s in-game bonus rounds, out pops the Randomizer feature. It is initiated when 3 free spins symbols appear on both the top and lower reels. A new screen with a wheel opens up. Once the wheel starts spinning, you can win a cash prize of 50x your stake, or the Free Spins feature can be upgraded to the Ragnarok Free Spins. 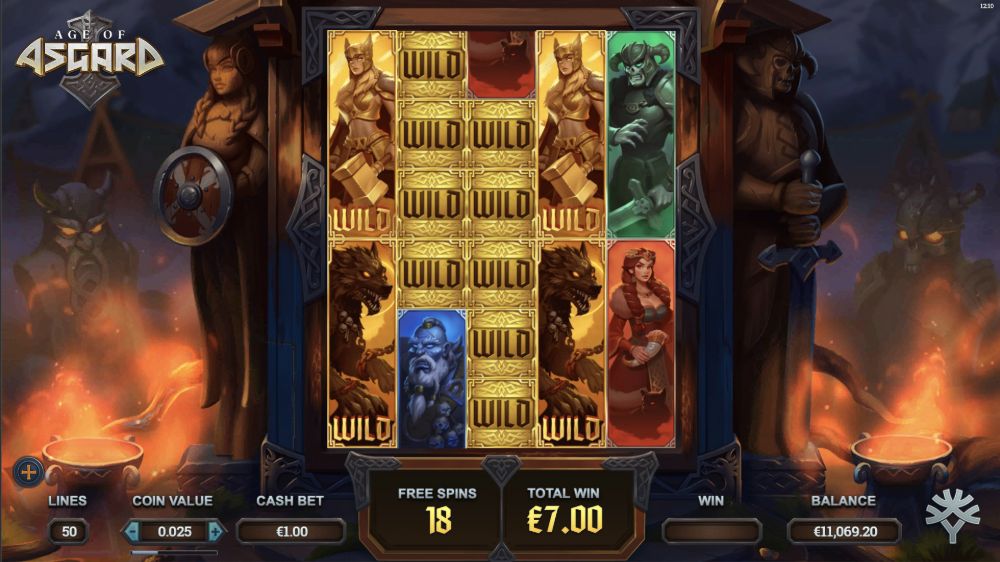 We’ll go as far as saying that Yggdrasil’s Age of Asgard is its slot machine of the moment. It is teeming with in-game bonus rounds and a Ragnarok Free Spins feature that pays as much as 2,444x your stake on each free spin. At an average bet of £6 per spin, we thoroughly enjoyed the game.

It plays like any medium-variance slot but pays out like a high-variance one. It also denotes a significant change in the direction we think Yggdrasil is heading.  Previous releases were built around a Free Spins bonus with a few other bonus rounds sprinkled in between. Whereas this slot with its jaw-dropping visuals, double reels and plenty of bonus rounds, operate in perfect unison.

With its profound and enthralling fantasy lore, Age of Asgard is an impressive high-flying brawler. If you’re done playing the game and you are still hankering for some Viking action, NetEnt’s Vikings is another jaunt.

Is The Game Playable On My Mobile Device?

Age of Asgard is compatible with Android, iOS, and tablets. Once you have registered an account, you can play the game right in your mobile phone’s browser. Some operators request that you download their app at Google’s Play Store.

Will I Receive a Sign-On Bonus To Play The Slots Online?

Yes, you will. Once the game is added to the online casino’s slots library, new depositors receive a match bonus and free spins to play it. Just make sure you play the game within the ambit of the bonus terms. 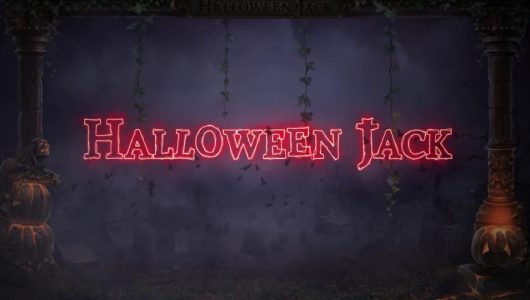 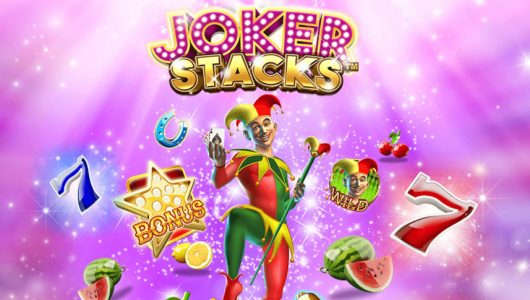