4 Fantastic Fish is a video slot from popular studio 4ThePlayer. Our initial thought was what’s up with all the fishing-themed slots of late?

It appears that online slot studios are trying to outdo each other with the best fishing slots. Not that we’re complaining because all of them are mint!

Pragmatic Play started the Big Bass Bonanza series since then it just snowballed. So, it’s safe to say that slots with fishing themes are in vogue at the moment.

4ThePlayer ramps up 4 Fantastic Fish slot with Respins, Cash Ways, and Jackpots. Moreover, the slot features a 6×4 grid with up to 4,096 ways to win.

The betting range is not too bad either which starts at $0.10 to $80 per spin. The volatility is bruising and there are two RTP versions, which we’ll get to in a bit.

Slotters can play 4 Fantastic Fish at the best online casinos with real money.

The RTP of 4 Fantastic is 96% but it can drop to 94%; depending on which online casino you play it.

Let’s just start by saying that the graphics look pretty cool they remind us of ‘Finding Nemo’.

The ocean serves as the backdrop for the reels. On the reels, there are a bunch of symbols such as rods, seagulls, the fisherman, and tackleboxes.

Finally, the low-value symbols are the card suits from 10 to Ace. The boat is the wild which steps in to replace the regular pay symbols 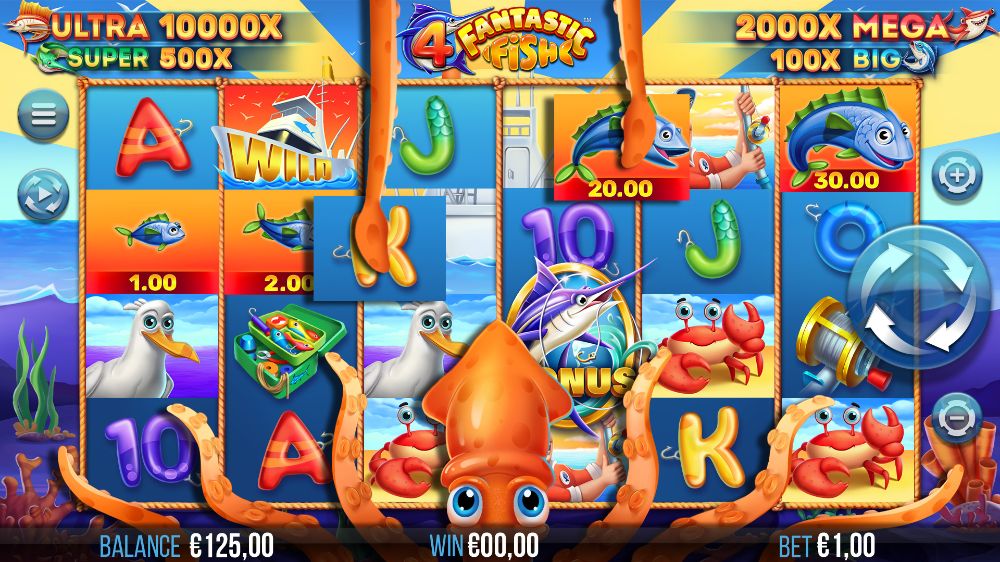 The action revolves around the fish symbols because they display various cash prizes.

Long story short, the bigger the fish the grander the payout starting with 0.2x up to 100x the stake.

You’ll initiate the Cash Ways feature when a bunch of fish symbols pitches. Further, you’ll benefit from a win that combines all their values.

You can also trigger the Giant Squad on a random spin; it guarantees you a bigger win by rearranging the fish symbols.

The 6th reel showcases jackpots with a variety of fish symbols. You’ll receive a win when a fish forms part of a winning combination.

You need 3 or more Merlin scatters to unlock the Respins bonus round. The reels that occupied the scatters are active whilst the others are not.

The bonus round awards 3 respins, and new fish symbols also reset the respins count. In other words, the feature reverts back to the original 3 respins.

The interesting thing about the Marlin scatter is that it unlocks locked reels. The Giant Squid symbols appear during the bonus as well.

Their job is to move the fish symbols from the locked to the unlocked reels.

When the sharks pitch they gobble them up, but they also double wins with a 2x multiplier. The reel the sharks gobbled up offers new symbols.

We give a courtesy bow to 4ThePlayer with their feature buy option because it’s cheap. Yes, we know it’s only 3x respins at a cost of 60x.

But, the potential for an extra 3 respins is more than 60%. At least, that’s what happened to us during the testing phase.

We decided to go with 150 spins instead of the usual 100 spins in the demo mode.

We wanted to experience the slot at full throttle and at the max bet of $80.

Our testing phase clearly illustrates that the big wins with this slot are possible. What a ride!

To help you on your way to the catch that won’t get away. Check out our piece on why do slot players lose their money after a big win? 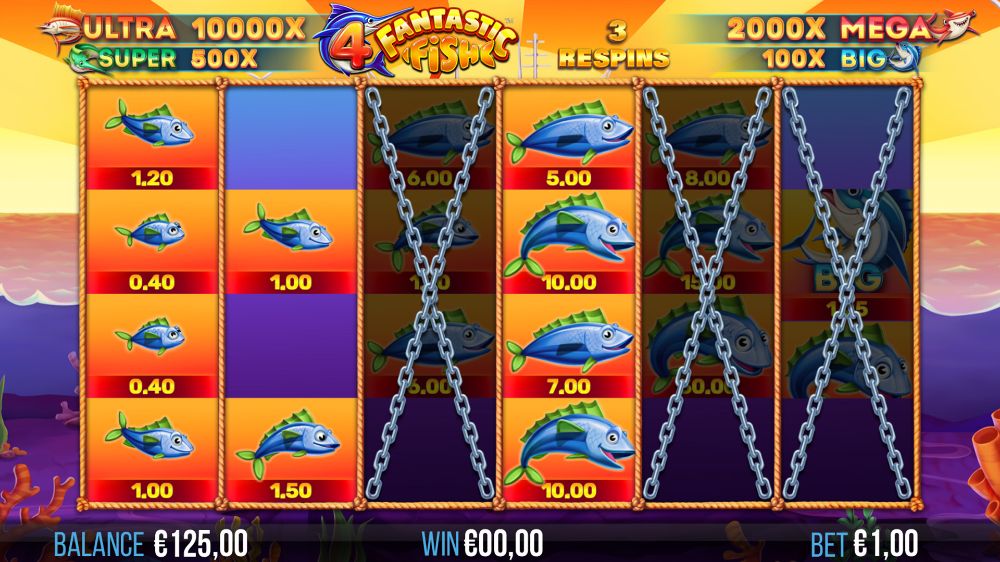 4ThePlayer delivers a stellar online slot with 4 Fantastic Fish! What sets the fishing-themed slots apart from their peers is that they’re oodles better.

Okay, they don’t always have the best visuals but they look after the pocket! We’re talking about cash rewards from a million dollars upwards.

4ThePlayer tones down the action a bit with a respins feature. Yet, the possibility of snagging extra respins is good for a top win of 15,000x the stake.

Besides, if you want to cut out the small fish in the base game. You can go straight for the Marlin via the buy option and it’s quite cheap!

Apart from the feature buy option, 4ThePlayer makes a few other arrangements as well.

You don’t need collector symbols to collect prize money; the only thing you need is to line up the fish symbols.

And, let’s not forget about the Squid that moves the fish around for magnificent wins.

Best of all, online slot studios tinkered up the world of slots. How so? With a bevy of entrancing slots with fishing themes, right? Of course!

Now, imagine if they incorporated them with Cascading engines or Powernudges! Won’t that be a sight for our hungry slot eyes!

Perhaps we’ll see a few releases with those game engines further down the line.

4 Fantastic Fish is a sumptuous virtual slot that plays like a tale over a campfire. Yeap, it’s that good!