When I saw WGS’ 20,000 Leagues video slots the first thing that came to mind is Sarah Brightman’s mesmerizing song ‘Captain Nemo’ (https://www.youtube.com/watch?v=nbapQZTQDGQ). I dare ya to play the song while you’re playing this slots and may it bring you oodles of luck. Right, back to the task at hand.

On a more serious note if you don’t know who Captain Nemo was you can read more about this fictional character on this page: https://en.wikipedia.org/wiki/Captain_Nemo. The slot features 25 paylines, 5 reels and ofefrs a top non-progressive jackpot of 5,000 coins. The theme of 20,000 Leagues is about Captain Nemo and his incredible adventures as he navigates the seven seas for riches. It’s based on the popular 1954 cinematic film ‘20,000 Leagues Under The Sea’.

Paying symbols that appear on the reels are the submarine (wild), the 20,000 leagues logo (other wild), diving suit, shark, treasure chest and the usual card symbols from 9 to Ace. The symbol that offers the top cash prize is Captain Nemo, 5 of them at the maximum wager pays you a whopping 5,000 coins.

My take on the visual side of the game is that the graphics are a bit dated but the game play it offers is solid as the man Nemo himself. If you’re a fan of the epic film this slots is a must, it offers loads of wild substitutions (2). Even though the RTP (return to player percentage) of the game is not given based on my playing experience I’d say it hovers around the 96.1% mark, give or take. If you’re not sure how the RTP of a slots works read about it here: https://casinowhizz.com/casino-games-payout-percentage-explained/ 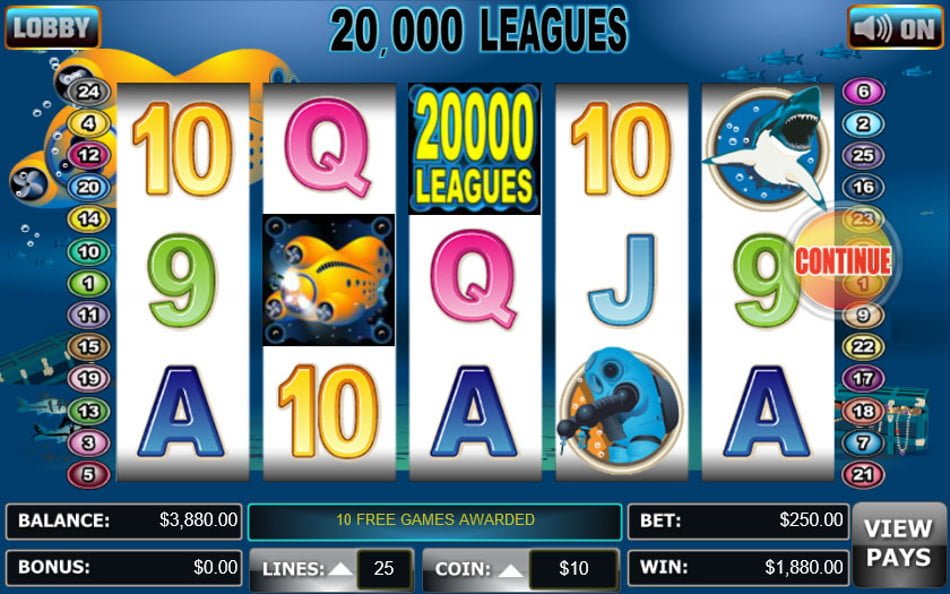 Before you embark on a fun-filled adventure with Captain Nemo decide how much cash you’re going to wager per spin first. I suggest you keep the lines to the max, in other words play all 25 of them. The smallest stake per spin is $0.25 while the maximum stake is $250 making the slots suitable to high-staked players.

The game has 2 wilds (The Submarine and The 20,000 Leagues logo), the complete a winning combination when the replaces the other symbols. Of the two wilds I’d say the submarine offers the best wins but only pitches on reels 1, 2, 4 and 5, it also offers a bag full of free spins and multiplier wins.

The other wild is the ”20,000 leagues” symbol, unlike the submarine it only appears on the third and middle reels. Should the symbol appear on the said reels an instant free spins is awarded. If you hit a combination of the Treasure Chest, the Shark and Captain Nemo you’ll win a nice pot of cash.

Despite the lack of bonus rounds and scatters WGS’ 20,000 Leagues is really not a bad slots. Central to the game is its 2 wilds which really spruces things up even if you’re miles beneath the ocean’s surface.

It’s a great theme further backed by intuitive game mechanics and the potential for some really big wins lurk here. It’s a medium variance slots that can be played by low, medium and high rollers. Catch the two wilds on an active payline and you’ll be counting dollar signs.

Let’s face it compared to the Betsoft slots the game lacks the ‘bits and pieces’ to keep seasoned players interested for prolonged periods. However, I find that it’s as good as any slots for beginners to hone their craft on.